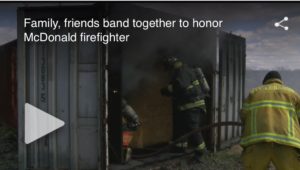 BOARDMAN, Ohio (WKBN) – At the end of March, McDonald Volunteer Firefighter Jason Grimaldi died of a stroke. He left a large family and five children.

Now, his friends and family are banding together to honor his legacy.

The Halligans and Hooligans fundraiser takes place on Saturday, November 11. It will be from 6 p.m. to midnight on Saturday.

The event will be at Suzie’s Dogs and Drafts, located at 1393 Boardman-Canfield Rd. in Boardman.

The Grimaldi Fund is part of the Anthony V. Spano Foundation. The group is raising money for scholarships to firefighter school.

Tuition is at least $1,500. Volunteers have to pay that out of their own pocket and don’t get paid for their service.

In addition to raffles, the group is also selling T-shirts to help raise money.

The fundraiser started when Jason’s daughter, Talia, was interviewed by WKBN in July.It was then that she organized a memorial on her father’s birthday.

This year’s event organizer, Wendy Fry, said their goal is to make it an annual fund so they can help as many aspiring firefighters as possible.