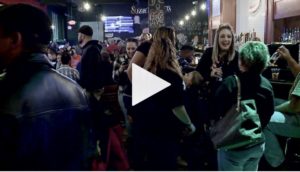 YOUNGSTOWN, Ohio (WKBN) – A former volunteer firefighter in the Village of McDonald who recently died was honored Saturday night.

Jason Grimaldi was a man of many passions.

“He was a supporter of the Rust Belt Theater, children’s science center and he also supported some science museums,” said Talia Grimaldi, Jason’s daughter. “He also liked The Butler Institute of American Art.”

But Saturday night, his foundation raised money for his biggest passion of all.

“He worked a full-time job and still found the time — made it a priority — to be a volunteer firefighter,” Shanon Grimaldi said.

Jason Grimaldi died unexpectedly in March from a stroke.

Now, his family and friends are carrying on his legacy by helping aspiring firefighters achieve their dreams.

“We’re willing to send firefighter volunteers through school to help them get that process started,” Shanon Grimaldi said.

There were basket raffles, T-shirt sales, and drink specials Saturday at Suzie’s Dogs and Drafts in Boardman. It’s just some of the many ways the Halligans and Hooligans fundraiser raised money.

It all goes towards sending firefighters to Firefighter 1 school.